Gravity Falls Wiki
Register
Don't have an account?
Sign In
Advertisement
in: Characters, A to Z, Season 1 creatures,
and 8 more
English

The Legend of the Gobblewonker

Working at a major children's network

Faded away after defeating Bill

Xyler and Craz are characters from the movie Dream Boy High. They were temporarily brought to life from Mabel's imagination by Bill Cipher while they were inside Stan's mind and later again by Bill when he imprisoned Mabel in Mabeland.

Xyler and Craz were first seen in "The Legend of the Gobblewonker," as a figment of Mabel's imagination. In her fantasy, they are seen in a convertible stopping at an intersection, at which point Mabel, who is currently in a giant hamster ball, begins flirting with them. After the light switches back to green she rolls away, leaving the two amazed by her appearance in the ball.

Xyler and Craz make another appearance in "Dreamscaperers." They first appear on Mabel's VHS cover of "Dream Boy High." Afterwards, as stated above, the duo were temporarily brought to life in Stan's mind. They happily team up with Soos and the twins to help find the memory of Stan inputting the safe combination. Near the end of the episode, Xyler and Craz were destroyed by Bill, but soon after Mabel revived them and they played synthesized music in an attempt to defeat Bill. After the confrontation with Bill, Stan is about to wake and Dipper, Mabel, and Soos are about to leave the mindscape; Xyler and Craz bid farewell to Mabel, saying they'll see her in her dreams as she finally fades to the real world. They retain in Stan's mind, as seen that Stan remembers both of them, much to his annoyance.

In Mabel's fantasy sequence in "The Golf War," Xyler and Craz make another appearance, dressed as paramedics when arriving to jokingly treat Pacifica Northwest for a "serious burn." Mabel later high-fives Xyler after Pacifica states that she's ruined.

In "Weirdmageddon 2: Escape From Reality", they introduce Soos, Wendy, and Dipper to Mabeland and give them a tour. Later when Dipper mentions reality and he is brought to court for breaking Mabeland's only rule, they are her lawyers. They are the only inhabitants of Mabeland who don't turn against Dipper and Mabel after the trial. At the end of the episode, they end up in the real world and wonder how.

In "Weirdmageddon 3: Take Back The Falls," after Gravity Falls goes back to normal, they disappear along with Rumble McSkirmish.

Since they are part of Mabel's imagination, they both adore her and agree with whatever she says. Both of them have similar personalities, and neither of them seem to be very intelligent. However, they are good musicians, as seen in "Dreamscaperers," and they are featured on the VHS Dream Boy High with instruments. In "Weirdmageddon 2: Escape From Reality," they are shown to dislike reality. 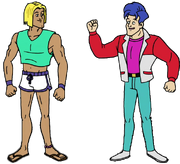 As described by Stan, they are both "brightly colored and radical young men."

In "Legend of the Gobblewonker," they were depicted with thicker lips.

In "The Golf War," Xyler and Craz appear in EMS technician garb with some differences in their physical appearance. Their jaws are less chiseled and they look less buff than in previous episodes.