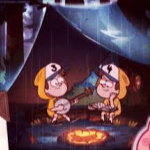 aka Tracey and Quattro

This account is mostly used by Tracey. Quattro uses it from time to time, though (or he did before he went insane).

Jeff and Shmebulock have both used it once, they both got chased by Tracey, Jeff used the account again, and got chased again.

I don't mind them using the account when it's on the topic of "Quattro's gone insane".

Quattro's no longer insane, but he can't explain what happened at all.

Retrieved from "https://gravityfalls.fandom.com/wiki/User:Tracey%26QuattroPines?oldid=561472"
Community content is available under CC-BY-SA unless otherwise noted.