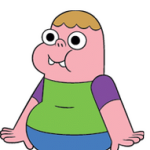 Everything include Clarence's episode

Employee at the Mystery Shack, Tweeting with Mabel and Clarence

To have an epic summer romance with Mabel Pines

Being intelligence
Arts and crafts
Playing Clash of Clans

To flirting between Clarence and Mabel.

"When life gives you lemons, draw faces on those lemons and wrap them in a blanket. Ta-daaa! Now you have lemon babies." - Mabel

"15 is for the beginning of watch on CN and this is for Clarence. This is happens to celebrate between anniversary and monsary." - HDC

Boss Mabel is temporarily manage in the Mystery Shack while Stan is gone at vacation to play a game show Cash Wheel as being challenge the profits.

MabelxMermando is more preferred the summer romance and is more interested than others.

Wendip is more interested than Wendy's old boyfriend Robbie because Dipper is kind to Wendy but he is a little nervous to convince with.

Dipper is very usual a Mabel's twin brother that he could do solve things as a Mystery twins and fist bumping to impress with.

Candy is a Mabel's second best friend that she is very quite flirting together and she is separated with Grenda.

Mabifica is more competivite mentions but they overwhelm to do so and sometimes friends.

Retrieved from "https://gravityfalls.fandom.com/wiki/User:Hansthewikipart2?oldid=432258"
Community content is available under CC-BY-SA unless otherwise noted.