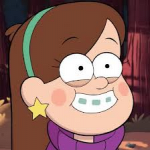 Mabel Pines is the slightly older[14] twin sister of Dipper Pines. Energetic, bouncy, and optimistic, Mabel makes the best of every situation with a big goofy smile, whilst annoying her brother.

Sometime during the month of June[15], Mabel and her twin brother, Dipper Pines, were sent from Piedmont, California[7] to the small town of Gravity Falls, Oregon to visit their great uncle, Stan. Mabel believes that it is her chance to have an epic summer romance. She shows her boy-crazy obsession when she agrees to date a very mysterious creature, who is disguising himself as a teenage boy. But little does she know that he is actually a group of gnomes posing as a teenage boy.[16] The gnomes try to kidnap her because she won't be their queen, but Dipper rescues Mabel and brings her back to the Shack on a golf cart. Mabel then defeats the gnomes using a leaf blower. Stan allows them to take anything from the Mystery Shack for free, and Mabel decides on a grappling hook.

Mabel also goes fishing with Grunkle Stan and Dipper as a family bonding day. When she hears that there is a monster in the lake named the Gobblewonker, she and Dipper want to go find it and get the proof. Mabel wants to discover it so she can buy a giant hamster ball to roll in. They ditch Grunkle Stan and go with Soos to find the monster. In the end, the Gobblewonker turns out to just be an old man looking for attention. Feeling bad, Mabel and Dipper soon go back to Grunkle Stan to have their family bonding day.[17]

When Mabel and Dipper discover Grunkle Stan's old wax figure museum, Mabel creates her own statue of Grunkle Stan, to make up for a melted Abe wax figure. When the opening ceremony turns sour and Wax Stan is found "decapitated" in the middle of the night, Mabel and Dipper search for the murderer. Failing to do so they attend Wax Stan's funeral, attended by Soos and the other wax figures, only to realize the murderer wasn't human at all. They fight off all the murderous Wax figures. Mabel throws their remains in the fire while Dipper deals with Wax Sherlock Holmes.[18]

Mabel later learns of an alledged psychic in town, named 'Lil Gideon, and goes to one of his shows alongside Dipper and Soos. The following day, she is greeted by Gideon and the two spend time together, ultimately leading to the boy asking her on a day, which she reluctanlty agrees to do. After the first outing, however, Gideon incessantly invites her on more dates, and Mabel, driven by peer pressure and not knowing how to reject his offers, complies. Eventually, Dipper volunteers to end the relationship with Gideon for her, causing his sister great joy. When he carries out his promise, Gideon is enraged to the point of attempting to murder him, though he is saved when Mabel intervenes, breaks up with Gideon herself and destroys Gideon's amulet. Back at the Mystery Shack, the Pines talk about their days with their new enemy and mock him, while Gideon plots his revenge on them.

When Mabel goes to the Dusk 2 Dawn with her brother Dipper, Wendy and friends, she stumbles upon a banned candy called Smile Dip. She eats about half of the shelf, or "bleventeen" as she put it, and begins to hallucinate, for example, a fantasy of riding on a flying dolphin with fists saying, "The future is in the past. "Onward, Aoshima!" Then, the store is taken over by ghosts and Ma and Pa get Mabel to communicate with the teenagers.[19]

Mabel immediately notices that Grunkle Stan has a "thing" for Lazy Susan the waitress at Greasy's Diner, so Mabel works some of her awesome "Mabel magic" and decides that she should be the one to help Grunkle Stan become more attractive and appealing to Lazy Susan. After having Soos pretend to be Lazy Susan, and Grunkle Stan spitting on the ground asking if "she" has any money, she decides to try a different approach to it, by "bringing that inner beauty to the outside". The end product looks worse than the original, and Mabel finally gives up, until Wendy says that Stan is unfixable, just the spinny pie thingy in the diner. Mabel has a sudden brainstorm. She marches Grunkle Stan down to the diner to see Lazy Susan. She ends up giving him her number, and Mabel is overjoyed.[20]

When the Mystery Shack hosts a party Mabel begs Grunkle Stan to let her mingle with other kids he eventually says yes and gives her work spot to Dipper. She than meets Grenda and Candy Chiu, who soon become her friends. They tell her about Pacifica Northwest the most popular girl in Gravity falls they soon become enemies and compete in a competition to see who could "party-hardy" the most, engaging in activities like singing and dancing. Though Mabel initially receives the audiences boat, Pacifica intimidates the party-goers to cheer for her and bribes Old Man McGucket. Unlike the other guests, who go off to Pacifica's afterparty, Candy and Grenda stay at the Shack and have a sleepover with their new friend.[21]

Later on when Pioneer Day comes she runs into Pacifica again. Pacifica says Mabel is too silly and not serious. This makes Mabel angry and goes with Dipper to find the true founder of Gravity falls. After going though many "hard" puzzles, Mabel cracks them all using her silliness. After finding the real founder, Quentin Trembley they also found out he was once president. To their surprise the Sheriff and Deputy found them and sent them with Trembley's body to Washington D.C. On the way there they free Trembley and found out he survived by encasing himself in peanut brittle. They free themselves and eventually return back to Gravity Falls. Mabel no longer wants to prove to Pacifica wrong, but this does not stop Dipper.[22]

When the Mystery Fair comes around Mabel wins a pig at the fair which she names Waddles. Later on her and Dipper find a mysterious man from the future with a time travel device. Mabel wants to go back in time to remember her greatest moment in life, adopting Waddles. Which she does again, and again, as Dipper keeps on going back to stop Robbie from dating Wendy. Eventually Mabel helps Dipper which succeeds, but leads to Mabel not winning Waddles. They get in a huge fight and end up going through time, to the 1800's, the Jurassic Times, the Future, the mystery shack 20ish years ago, "Tourist Trapped," "The Legend of the Gobblewonker," and "Headhunters." They finally end up in the present where Mabel doesn't have Waddles she gives up and becomes miserable. Dipper gives in and gives her Waddles back.[23]

Mabel accuses Grunkle Stan of ackin cray-cray until she find out he has a fear of heights, A determined Mabel tricks Stan into climbing the water tower in a attempt to help him get over his fear. After running around from Rumble, she is seen nervously looking down, now having her own fear of heights.[24]

One day, Mabel discovers she is taller than Dipper by 1 millimeter (0.039 inches), and believes she will become the "Alpha Twin". She starts teasing him about it, causing Dipper to create a Crystal flashlight that can grow and shrink things. Dipper uses it to make himself taller, and the twins fight over the light, causing it to fall in Gideon's hands. Gideon shrinks the twins and takes them to his house, but they escape and chase him back to the Shack by using a balloon. However, the twins start arguing about their height, and Gideon captures them again. Inside is pocket, Mabel tells Dipper the only reason she made fun of him was because he always rubbed his victories in her face. The two make up and escape. They immobilize Gideon by tickling him, and Stan kicks him out of the Shack. The twins regrow themselves, and Mabel is still a millimeter taller.[25]

Upon learning about Gravity Falls' summer version of Halloween, Summerween Mabel and Dipper become very eager to trick-or-treat with Soos, Candy and Grenda. When the Summerween Trickster threatens to eat the group if they fail to get him 500 pieces of candy, Mabel retains a positive outlook, seeing it as a reason for her brother, who said he was sick to get out of trick-or-treating to attend a party with Wendy. The gang begins to collect treats, anmd Mabel soon realizes that Dipper putting on his costume would greatky increase the amount of candy received at each house. As Dipper talks to Wendy about the party, Mabel and the others, who had gone to obtain the final candy, overhear the conversation, thereby learning of Dipper's motives, and Mabel becomes angry with her brother. After the group reaches their deadline for getting the Trickster's treats, the monster comes and, since the group lacked the required candy because of Dipper accidentally dumping it into a stream, attempts to eat them, only to be destroyed when Soos drives through him. The Trickster then reassembles and chases the twins, Soos, Candy and Grenda into the Summerween Superstore. There, they learn that the Trickster is made of candy, and Soos eats him. At the Mystery Shack, everyone, including Stan, Wendy and Waddles, watches movies, eats candy and "celebrates pure evil."

[[File:Mabels glow pajamas.png|thumb|Mabel's light-up sweater.]] Mabel Pines is a buoyant, cheerful, bouncy, energetic, and full of spirit optimist who skips through life with a braces-filled smile and an assortment of extremely colorful knit sweaters. It is her outgoing personality and fearless curiosity that comes in handy when Dipper needs help solving a mystery, even if she isn't always aware of her silliness. Despite her cheerful attitude, she can occasionally get her feelings hurt easily, especially by her rival Pacifica Northwest. Mabel lives in a world of preteen novels (most are about vampires), and her fixation on finding her one true love occasionally lands her in sticky situations which ultimately require her brother's help. Still, despite all the weirdness in Gravity Falls, Mabel is always a "glass half full" kind of girl.[5] She is rarely angry or upset, and generally keeps a positive outlook.

Mabel is a short twelve year old girl, and is a millimeter taller than her twin, Dipper[26]. Her cheeks are round, her hair is brown, and her eyes are brown, like Dipper's, and she wears braces. Mabel's apparel varies for each episode, more so than any other character's, with different sweaters and occasionally various earrings and headbands. Creator Alex Hirsch stated in an interview that Mabel will have a different sweater every episode. Her signature outfit is a pink sweater with a rainbow shooting star on it and a purple skirt with black shoes and white socks. She primarily wears sweaters, but she is does not wear one at the end of Tourist Trapped, during the murder scene of Headhunters and through most of Irrational Treasure.

Mabel claims to be an Arts and Crafts master, which is supported by the skills she's shown so far, including knitting, as she knits her own sweaters, scrap booking, having made a few scrap books about her and Dipper's time in Gravity Falls and of their past halloween costumes, wax sculpting, as seen in Headhunters when she makes a realistic wax figure of Grunkle Stan in a short amount of time, and very good at folding paper, as seen in Irrational Treasure when she makes a hat out of an old piece of paper in a few seconds. Mabel is also skilled in animal calls.

Retrieved from "https://gravityfalls.fandom.com/wiki/User:Candy.Cane.Crazy?oldid=490735"
Community content is available under CC-BY-SA unless otherwise noted.