"Dipper, please, this is you you're talking about."

Tyrone was created to help Dipper impress Wendy. Dipper was going to call him "Number 2," but Tyrone refused to be called that and then suggests "the name [they] always wanted;" Tyrone. He worked at the ticket booth during the Party at the Mystery Shack so Dipper could execute his plan to get Wendy to like him. When Robbie shows up, the two devise a plan to distract him by having Clones 3 and 4 steal his bike.

When Soos plays a slow song, Dipper fails to ask Wendy to dance. Tyrone, Dipper, and the other clones revise Dipper's original plan.

When Dipper strays from the revised plan, Tyrone and the other clones turn on him. They attempt to prevent Dipper from dancing with Wendy by locking him in a closet, and Tyrone nominates himself to dance with her because he is the oldest clone, but the newest clone nominates himself since he is the newest clone. While the clones argue about who gets to dance with Wendy, Dipper escapes. The clones attempt to recapture Dipper, and a brawl between the clones and Dipper ensues.

Dipper uses the smoke created from a party popper to set off a fire sprinkler, melting Clones 5 through 10 and Paper Jam Dipper. Dipper and Tyrone continue the fight but stop when they see that Robbie has returned. Dipper and Tyrone go to Wendy's hiding spot on the roof after their failure and have sodas, which accidentally melts Tyrone. His last words are a request for Dipper not to over-complicate his attempts to win Wendy's affection, for his sake.

In "The Last Mabelcorn," when Dipper's memories are being displayed on screen during the use of Project Mentem, one of them reads, "I miss Tyrone!"

Tyrone is a copy of Dipper Pines, meaning he has the exact same personality. He tends to be more sympathetic and loyal compared to the other clones. He is a helpful person, but sometimes wants his own way. An example of this being him desiring to stick to the plan because he didn't experience some things that the original Dipper did. 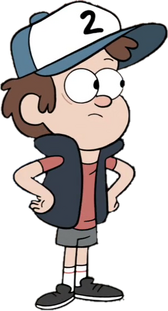 Tyrone looks exactly like Dipper Pines, except that his skin, hair, and clothes are paper, and his body colors are a desaturated version of Dipper's own. He does not wear the black bow tie which Dipper wears for the party, and he doesn't have a blue pine tree on the front of his hat; instead, the number 2 is drawn there in black marker.

Tyrone and Dipper start out as friends, and get along well over their shared interest in Wendy and identical personalities. They become enemies when Dipper strays from the plan, but when Robbie steals both of their chances of being with Wendy, they become friends again.

Tyrone allies himself with the clones during the clone fight, but becomes friends with Dipper once Robbie joins the party.

Retrieved from "https://gravityfalls.fandom.com/wiki/Tyrone?oldid=550580"
Community content is available under CC-BY-SA unless otherwise noted.