Gravity Falls Wiki
Register
Don't have an account?
Sign In
Advertisement
in: Real Life, A to Z, Lists, Events

The McGucket Hoax is the name given to a fake leaked image of Old Man McGucket writing Journal 3 that spread in 2013. It was believed to have been a leaked screenshot from an upcoming episode. However, after the premiere of Society of the Blind Eye, it became known that the image was not only fake, but fabricated by Alex Hirsch himself to throw fans off.

Throughout the first season of Gravity Falls, there had been several instances where the show hinted at the possibility of Stan having a twin brother. Clues included things such as Stan's license plate, the great amount of care he had for the Wax Stan figure that Mabel made in Headhunters, the supposed sighting of the twin brother in The Time Traveler's Pig and many more.

While Alex and the crew had hoped these clues would not be enough for the fandom to piece it together, they very soon figured it out and the theory of Stan having a twin brother began to spread on fan blogs on Tumblr, forums and more. This was not good as the whole end goal of the show had been discovered by the fandom and this risked jeopardizing the series' big reveal. So, rather than rewriting or altering their plans, Alex and his team decided to work out a counter narrative which they could leak out to have fans be thrown off the trail of the real author of the journals.[1][2]

The original sketch of the fake screenshot was done by Alex himself, while Joe Pitt drew and colored in the full image. The image was of a younger McGucket, with 6 fingers, using an ink and quill to write in Journal 3. The idea utilized Phil Rynda's design of McGucket having a permanent cast to give the illusion that it had something to do with why he now had 5 fingers.

Alex then posted the image on 4Chan under the alias that he was a fan who had been visiting the Disney TVA offices and managed to snap this major leaked image of an upcoming episode that was accidently left up in an empty room. To make the leak more legit, he included an actual image of the then yet to air episode Gideon Rises. This way, fans would be more so inclined to believe the image to be real given the episode's existence was already known and when it aired, the scene would be confirmed as being real, making people think the McGucket image was real too. This was also helped by the fact the leak happened in April 2013 and by that point, Gravity Falls had already been renewed for a 2nd season.

After letting it sit up for several hours, he took the images down and then tweeted and later deleted a tweet in which he expressed anger about the leak to make it seem more real. As expected, the trick worked and suddenly the fandom had shifted gears away from the Twin Stan theory to now believing that the entire next season of the show had its big mystery leaked and that McGucket wrote the journals.[3]

The image became a hot topic amongst the fandom as to its validity. Some argued it was real given it had come out from the show's production offices, was posted to 4Chan and also due to Alex's deleted tweet being proof it was a leak. At the same time, others pointed out discrepancies in the whole way the leak happened, the production code not being that of any upcoming known episode, the two images looking like they had been taken back to back, implying the crew may have been behind it and also why Alex would be so quick to deleting his tweet. Some believed it was too good to be true as why would such an major scene be left open in an editing screen while a tour was going on. Others though were sold on the possibility that the show had been spoiled, including big and influential figures in the fandom.

The truth would not be known until the premiere of Society of the Blind Eye, which confirmed canonically that McGucket had not written the journals but was in fact an assistant of the author. Alex would then fully come clean with a tweet in which he poses next to the image, confirming he was behind it and that it all was a hoax. [4]

The McGucket hoax is regarded by some to be one of the best tricks ever played on a fanbase by its creator. The fact Alex didn't even need to do the leak but did so regardless helped Gravity Falls become more regarded in terms of how it repaid its audience for their commitment to it. It was also significant in the fact that the crew did not decide to double down and change the ending. They instead chose to throw fans off to make the reveal more rewarding for the ones who believed it than change it and subvert expectations in a negative way.

The hoax was also a way in which the crew learned just how fast and capable the fandom was in terms of solving major mysteries. It also ensured fans would be more mindful of possible future leaks as they very well could have also been fake ones by Alex or the crew, though nothing like this ever did happen again. Fans also ended up being more cautious in terms of believing theories just in case they may not be 100% true.

The Stan Twin theory would of course go on to be proven true with the premiere of Not What He Seems. Alex also managed to recover the original sketch he made of the hoax image while cleaning out his office as production on the show ended in 2016. [5]

Alex's Image that confirmed the hoax 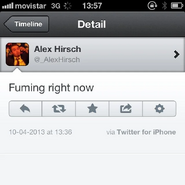 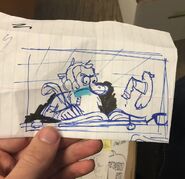 Alex's Sketch of the image

The McGucket Hoax
Video on the Hoax from the Box Set