"I do not fear death." -Aragorn

I think no. More fitted if this is like this

I'm leaving this note here because I'm seriously getting tired of seeing people say the Trickster looks like Slenderman. In what way does this look like 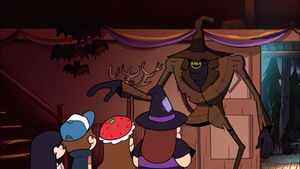 They're both tall and thin. That's like saying... Grimace from McDonalds looks like Santa Claus because they're both fat and cheerful. Please take note: Slenderman is featureless, white, wears a black suit and tie. The Trickster is dark purple, wears a ratty patchwork jacket and pointed hat, and wears a smiley faced mask. We already know the Trickster is an homage to No Face from Spirited Away, which is why he turns large and gelatinous, and sprouts many limbs. What more is there to say? YazzyDream★ 11:36, June 9, 2014 (UTC)

Actually, my younger brother is convinced that he's based off of No Face from Spirited Away. That might be true.
StillAlive (talk) 00:10, September 9, 2014 (UTC)

Retrieved from "https://gravityfalls.fandom.com/wiki/Talk:Summerween_Trickster?oldid=484381"
Community content is available under CC-BY-SA unless otherwise noted.