Hey there, I just noticed something while watching Mabel's Scrapbook shorts. When Mabel tells her joke to the Pony Heist audience, a figure visually similar to Dipper can be seen near the bottom right of screen. He has the skin tone and same hair, and the same hat with what looks like a very faint and worn out number '3' instead of a pine tree.

I did notice some differences such as how the character here has much smaller eyes, but it would've been fairly ignorant of Alex Hirsch to include a character so visually similar in appearance to Dipper. I believe this to be Dipper #3 who disappeared after stealing Robbie's bike in Double Dipper.

Does anyone else have any other theories or evidence to support this? Thanks

You're talking about Unnamed fat boy. For some reason people thought it was a Dipper clone in Soos and the Real Girl when it was also the boy. Ha. No clone reappearances yet. YazzyDream★ 09:35, November 25, 2014 (UTC)

Should we rename this page to "Dipper Clones"? Instead of "Clones" the general creature, it's specifically about Dipper's clones. Otherwise we'd need to mention Sev'ral Timez but that would feel sort of out of place, right? YazzyDream★

My vote is we should wait to rename, if ever, because we may just as well be adding MORE clones to this page. This is based not only on evidence from clues, foreshadowing, allusions and pop culture, but also the group of Sev'ral Timez clones shown alive and unborn in their tubes. Clones itself may become the category and types of clones the subcategory. Technically the wax figures are copies of real people too. If we're categorizing living paper copies as clones, we should consider categorizing the wax people this way also.

In Weirdmageddon 3, we can see in the credits that clones 3 and 4 survived throughout the series. Should the category Deceased be removed? L0laStarr {talk} 00:28, February 22, 2016 (UTC) 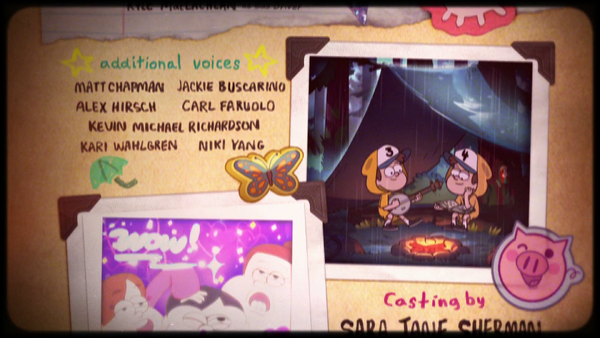 Oppose — Most of the other clones died, and the page has multiple clones, not jsut these guys

Oppose — Categories are added to a page if it can refer to ANYONE covered by the page, hence why Wax figures is in both the Male and Female categories. Mr BKnew yourfather I did! 22:33, February 22, 2016 (UTC)

Retrieved from "https://gravityfalls.fandom.com/wiki/Talk:Dipper_clones?oldid=425922"
Community content is available under CC-BY-SA unless otherwise noted.