Gravity Falls Wiki
Register
Don't have an account?
Sign In
Advertisement
in: Creatures, A to Z, Season 2 creatures,
and 3 more
English

Frozen in cryogenic storage, while in the form of Dipper Pines.

The Shape Shifter, (a.k.a. Experiment #210) is a creature able to take on any form that it has seen.

During the excavation for Ford and McGucket’s bunker, Ford found a mysterious egg in the forest that later hatched into what he would come to call the Shape Shifter.

The two initially planned to use the creature to test their underground laboratory’s cryogenic stasis chambers, but Ford was fascinated by his ability to change forms and learn speech, and kept the Shape Shifter in a cage to study, much to his nervous assistant’s displeasure. Despite being fond of the Shape Shifter and thinking of him as a pet, Ford always wore a surgical mask while interacting with him and refused to show him any of the monsters contained within his journal as a precaution against any trouble he might cause.

These precautions eventually angered the Shape Shifter, who decided to take McGucket’s form and trick Ford into giving him his journal so he could gain greater power, a trick which almost worked until Ford discovered a tied-up McGucket next to the Shape Shifter’s broken cage. The two then outsmarted the creature by leaving a decoy journal in one of the cryogenic tubes and freezing him when he came to collect it.

Afterwards, Ford and McGucket agreed to seal the entire bunker off due to the unpleasantness of the experience. While they were unaware of this at the time, this action later prevented the Shape Shifter from leaving the bunker once he broke free of his stasis tube, keeping him trapped below ground until the present day.

After running into Mabel and Soos, they formulate a plan to get rid of the Shape Shifter. Dipper, Mabel, and Soos blast a jet of water at the creature, accidentally hitting Wendy. The jet temporarily stuns the Shape Shifter, but it attempts to trick Dipper by taking Wendy's form in one last effort to steal the journal. The Shape Shifter attacks Wendy, and Dipper becomes confused by who is who, asking the real Wendy to give him a sign. When the real Wendy zips her lips, Dipper hits the Shape Shifter with Wendy's axe, and the two of them push the monster into the stasis tube to freeze it. Before becoming completely frozen, the Shape Shifter gives Dipper one last warning about prying too deeply into the mysteries of the town and the author, saying it will end with a fate that is worse than he could imagine. The last form it takes is Dipper screaming, saying it is "the last form [Dipper] will ever take" (an event that later happens in "Northwest Mansion Mystery", but is reversed in the same episode).

It also appears in Ford's flashback in "A Tale of Two Stans" as a recently hatched specimen which took on the shape of the mug that was beside it when it hatched. 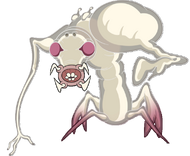 Its abilities enable it to change not only its appearance but also its entire form, including its voice. Thus, it can be as small as a Gnome or as tall as the Hide Behind or as amorphous as fire. Its desire for the journals in order to assume different forms seemingly indicates that it can't change into new forms unless it has "scanned" a form or has seen a picture of it. It can also "mix" forms to create new monsters, or become two things at once.