People making fun of him for liking BABBA

"This is foolish. Leave now, or die!"

The Multi-Bear is a magical beast who lives in a cave at the top of a high mountain. Dipper went to go and conquer it in order to attain manliness. It has eight heads, with one main intelligent head that is capable of human speech.

Dipper was sent by the Manotaurs to kill the Multi-Bear and bring back one of its heads as the final test to prove his manliness. When Dipper arrived, the Multi-Bear, showing a surprising degree of civility, told Dipper that to fight him would be foolish, and that if he didn't leave, he would kill him. However, Dipper refused to leave, and as such, the Multi-Bear carried out his threat, and engaged Dipper in combat. Unfortunately for him, the Multi-Bear found Dipper to be too agile and small of frame, toppling onto his back after being choked with the grip of Dipper's spear.

Staring death in the face, the Multi-Bear accepted his fate, asking for but one last request: to die while listening to his favorite song. Dipper, being nothing if not sporting, granted his request, but found to his surprise that the Multi-Bear's favorite song was Icelandic pop sensation BABBA's "Disco Girl," a song he himself was fond of.

Upon discovering this common interest, the Multi-Bear and Dipper held a brief dialogue on the subject, before being brought back to the matter at hand. Being an honorable beast, the Multi-Bear made no attempt to take advantage of the situation, preparing to receive a finishing blow. However, he never received it, as Dipper refused to kill the beast after finding out that he "is a really nice guy." Upon doing this, Dipper, according to the Manotaurs, did not acquire manliness.

A miniature-model of him is seen in "The Love God" when Mabel is trying to decide who could potentially be Robbie's date.

In "Weirdmageddon 2: Escape From Reality," the Multi-Bear, now wearing eye-patches, has taken refuge in the Mystery Shack, along with townsfolk and other creatures Dipper and Mabel met during summer, led by Stan: after Dipper and Mabel find their way back to the Shack, the Multi-Bear comes out of the bathroom, saying that they have run out of toilet paper. He also shuts the grate of the air vent from which Larry King's wax head was nibbling on Grenda's hair.

In "Weirdmageddon 3: Take Back The Falls," the Multi-Bear assists in the attack on Bill Cipher and his minions, manning the Shacktron's periscopes with his multiple sets of eyes and hands. Following Bill's defeat, the Multi-Bear, now without eye-patches, is seen among other Gravity Falls creatures, waving goodbye to Dipper and Mabel as their bus drives away from Gravity Falls.

The Multi-Bear is initially portrayed as an angry, violent creature, dismissing Dipper as yet another challenger doomed to die. He is not afraid to defend himself, as despite Dipper's young age, he puts up quite a fight. Once bested, he shows humility and honor by accepting his death without begging or bargaining, only requesting to listen to his favorite song one last time. He gets animated when discussing his love for BABBA with Dipper, also revealing he is sensitive by recalling how the manotaurs laugh at his musical tastes. During Weirdmageddon, he shows consideration for his fellow refugees, assisting Grenda when Larry King's head chews on her hair. 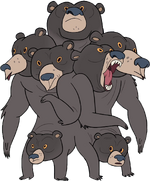 The Multi-Bear is a large black bear with eight heads and twelve limbs. He has one main head, capable of human speech and possessing the prime brain of the creature, which is surrounded by four other heads on his neck region. He has three other heads, one on his back attached to a partially formed separate body, and one in each of his two crotches.

On a closer look the Multi-Bear seems to have three separate bodies: two at the front and one at the back. Each of the two front bodies has a head on either shoulder and one in the crotch, while the backmost body has only a single head, and all three are attached to the main head on top. As each body has four limbs it all totals to eight heads and twelve limbs.

Retrieved from "https://gravityfalls.fandom.com/wiki/Multi-Bear?oldid=540139"
Community content is available under CC-BY-SA unless otherwise noted.