Manotaurs are creatures that are half bull, and half man, very similar to Minotaurs. The main difference is that they seem to care more about virility. They live in the caves of Gravity Falls which they call the "Man Cave."

Manotaurs are known to be stubborn, aggressive, and often disagree with each other. They are easily offended by remarks regarding their manliness and will do anything to prove themselves worthy. They are feared by most of the animals of the forest and even by Manly Dan.

They show carelessness towards other creatures (e.g. Chutzpar's use of a buck to scratch his back hair). They tend to dislike creatures who do not act in ways deemed "manly," and are not above teasing others. 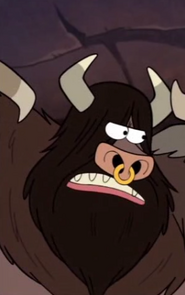 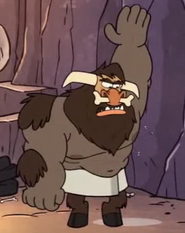 Other than their superhuman strength, manotaurs have a keen sense of smell. They are able to smell beef jerky and the emotional issues of Dipper.

To the manotaurs, strength is key, and they have no room for those who are not. They've demonstrated cannibalism.

The manotaurs have a very distinct ritual in which one becomes a "man", apparently consisting of 50 trials. It begins with plunging one's hand into the painhole, which is a mysterious pot hole that will give the hand's owner utter agony. Then, one proceeds to hauling a party wagon piled with all the manotaurs, developing chest hair (or in Dipper's case, glue manotaur hair onto his chest), cross a stream filled with crocodiles, forcing your eyes to read motivational posters of Glory and Freedom, drinking from a fire hydrant, leaping from cliff to cliff, and ultimately completing a task from Leaderaur; climbing the highest mountain, and entering a cave to take a head from the Multi-Bear.

Retrieved from "https://gravityfalls.fandom.com/wiki/Manotaurs?oldid=211481"
Community content is available under CC-BY-SA unless otherwise noted.