watch 03:27
Wiki Targeted (Entertainment)
Do you like this video?
Play Sound

This page exists for archival purposes. To contribute to this article, see: List of goofs

Corvallis is misspelled. Gravity Falls is shown in central Oregon.

Gravity Falls is shown in Eastern Oregon in "Scary-oke" and "A Tale of Two Stans."

The tall bald man has a camera bag around his shoulder.

Shadow has two rings in the center.

Introduction is shown to be in the middle of the book.

Dipper's entry has not been written yet.

Cart is out of harm's way.

The Legend of the Gobblewonker

Larry King is almost as tall as Sherlock Holmes.

Larry King is much shorter than Sherlock Holmes.

Multiple colors but one pencil.

The time is ten minutes and five seconds.

The time is ten minutes and five seconds again, despite time having passed.

Extra window for the vent on the wall.

The Hand That Rocks the Mabel

Mabel with one tooth.

Tambry is nowhere to be found.

Robbie is missing his pimples and piercings.

Numerous errors in the mirror

Guitar behind the counter

Guitar at the front of the counter

Died near the window, chalked at the back of the store

Mud on the top of her boots; Robbie's nose is miscolored.

Mud on the bottom of her boots

Silly string coming out of the side of the can

Stan is missing his bow tie.

The sleeve on the arm is faded.

Deodorant can; one other can on the box

The deodorant can has changed to the silly string can; a blue container has appeared on the box.

Chair next to Candy

The chair is gone.

Pacifica is on the dance floor and in the bathroom.

No line between glasses 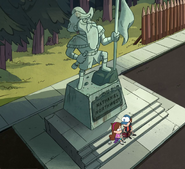 The statue is facing toward the name plate.

The statue is not facing toward the name plate.

The crate has a roof.

The crate has no roof.

Dipper's hat is a different shade of blue.

In the actual episode, he wore a red shirt.

Mabel has all the crackers.

Dipper and Soos now have some crackers.

As seen in "The Hand that Rocks the Mabel", the skull is too close to the wall for Stan to be able to lie behind it.

The skull isn't where it should be.

Nothing else on the ground

Mabel has no headband.

Candy, Grenda, Gorney and Waddles are not where they are supposed to be.

During the scene wherein Mabel and Stan make their bet, part of Stan's bow tie is missing an outline in one shot.

Part of Stan's bow tie is missing an outline.

Pink highlight on left side of head

Wendy has no boots.

Water bottle is not full.

No radio; Wendy's coat is zipped.

Radio reappears in next shot; Wendy's coat is unzipped.

Grenda has no lipstick.

Candy is missing her skirt.

Shark has one gold tooth.

Shark has all white teeth.

Mabel's skin is not green.

Suitcase is the wrong perspective. Sitting on background crates.

The shot is facing out the window.

The shot is facing away from the door, which is on the same side of the building as the attic window.

Retrieved from "https://gravityfalls.fandom.com/wiki/List_of_goofs/Season_1?oldid=570901"
Community content is available under CC-BY-SA unless otherwise noted.