Gravity Falls Wiki
Register
Don't have an account?
Sign In
Advertisement
in: Merchandise, A to Z, Real Life

View source
watch 03:36
Wiki Targeted (Entertainment)
Do you like this video?
Play Sound

The Original release consisted of seven different Gravity Falls Pop! Vinyls consisting of four individual characters, three of which were a chase (a limited followup design of the same character). These chases were; Bill Cipher, Dipper Pines and Mabel Pines.

The Dipper, Mabel, Grunkle Stan and Bill POP's (including the chase-versions) come with a foot stand, so they can stand up out of the box. Waddles comes without a foot stand.

There are eight individual Gravity Falls Pop! Vinyls that came out consisting of the main characters in the television series.

Available in two different variations, the regular or the 'chase' version. 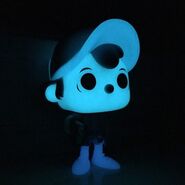 CHASE variant with the glow in the dark features

Available in two variations, the regular and the chase version. 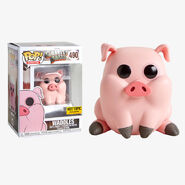 Release dates had been set officially by Funko for the May/June period of 2017, but were eventually released in March for unknown reasons. They were available on the Funko Pop! Vinyl website, as well as most comic-book companies or websites or stores that sell Pop! Vinyls. They were sold worldwide. As of 2020, the figures are discontinued, but are still avaible on websites like Ebay and Amazon.

Since the first releases, Funko has as of 2020 a list of figures who are either discontinued (vaulted), Temporarily not in the making (Temporarily Unavailable) or who are still made (Available).

The offical status for the Gravity Falls Pops are as follow: