Gravity Falls Wiki
Register
Don't have an account?
Sign In
Advertisement
in: A to Z, Episodes
English

View source
watch 01:55
Cobra Kai Season 4 - The Loop
Do you like this video?
Play Sound

Official website
Production website
Gravity Falls is an American animated television series created by Alex Hirsch, and produced by Disney Television Animation for Disney Channel and Disney XD. The first episode aired as a sneak preview on June 15, 2012 and the series officially started on June 29, 2012. Later, on March 12, 2013, the show was renewed for a second season at the annual Disney upfront. The series was officially renewed for a second season on July 29, 2013, just four days before the season 1 finale, "Gideon Rises," even premiered. The series premiered new episodes on Disney XD as of spring 2014, along with Wander Over Yonder.[2] However, starting on season 2, new episodes aired on Disney Channel as part of the channel's "Disney XD on Disney Channel" block. Despite this, "Scary-oke" and "Little Gift Shop of Horrors" premiered originally on Disney Channel.

During a Reddit AMA in August 2013, Alex Hirsch confirmed that he originally expected the show to be three seasons long (one season for every month of the summer).[3] Although, Hirsch thought that may be too many and instead considered it to be only two seasons and a possible movie.[4] However, on November 20, 2015 he announced that the second season is the final season of the series and that there are no plans to create a following season.[5] The series consisted of 40 episodes.[5]

Twin brother and sister Dipper and Mabel Pines are in for an unexpected adventure when they spend the summer with their Grunkle Stan in the mysterious town of Gravity Falls, Oregon, in the Disney Channel animated comedy "Gravity Falls." Upon their arrival, Dipper and Mabel's huckster great uncle enlists the siblings' help in running the Mystery Shack, a tourist trap he owns that overcharges unsuspecting customers. Although Dipper and Mabel quickly discover the Mystery Shack itself is a hoax, they sense there is something strange about their new town and together they begin to unlock the secrets of Gravity Falls.

Thrust into their new summer home, the fish-out-of-water twins try to adapt to their weird surroundings, especially Grunkle Stan, whose insatiable appetite for money drives him to spin every opportunity into a financial advantage. While Dipper grumbles about the prospect of the same boring routine of working at Grunkle Stan's hokey shop, Mabel seizes the chance to seek out an epic summer romance.

However, summer becomes much more interesting for the siblings after Dipper inadvertently uncovers a cryptic journal that offers insight into the strange and wondrous mysteries of Gravity Falls. Before long, Dipper begins noticing the town's idiosyncrasies, and with the book in tow and his enthusiastic desire to vanquish evil, he sets out to investigate the town's secrets. Trapped together in the small isolated town, the twins quickly realize they need each other to battle the imminent mysteries lurking in Gravity Falls. Meanwhile, when he isn't busy trying to make a quick buck from his unsuspecting customers, Grunkle Stan guards his own secret that might hold the key to unlocking the mysteries of Gravity Falls.

The series, created, directed and executive-produced by 2007 California Institute of the Arts (CalArts) graduate Alex Hirsch (Fish Hooks, The Marvelous Misadventures of Flapjack), is a production of Disney Television Animation. Set in the Pacific Northwest woods, the animated series features supernatural elements of adventure and mystery, inspired by the real-life summer trips shared by Hirsch and his twin sister while visiting relatives as kids.

"Mabel is going to be one of the breakout characters of the show. I really owe it to my sister and her many quirks. When we were growing up, my sister was obsessed with the boy band ’N Sync. She even broke her toe jumping up and down during one of their concerts. So, we did a show about a boy band, and of course, I had to get Lance Bass to do the voice of the singer. I had my sister fly down to meet him. She also always wanted to have a pet pig when we were kids, so I gave Mabel a pet pig on the show and she can live vicariously through her. She owes me big!"

The town of Gravity Falls was inspired by various towns and national parks Alex Hirsch in which has spent time, particularly Boring, Oregon. As Hirsch has commented, "We passed a sign for Boring, Oregon. We never went there, but I was positively enchanted with the idea that there was a town called Boring, Gravity Falls is partially from what I imagine Boring might be like. Or maybe the opposite of Boring, Oregon, would be Gravity Falls."[6]

The first Gravity Falls merchandise of any kind came out in 2012 with a series of T-shirts from welovefine with designs submitted for a contest. Hot Topic and other manufactures would release their own Gravity Falls apparel over the years.

In August 2013, Subway sold a series of promotional bags for the show with stickers and face gems. A total of 6 were made.

During the 2014 New York Toys Fair, Jazwares revealed that they were getting ready to release an entire line of Gravity Falls toys beginning in Fall 2014. Including: plush toys, figures, a radio controlled Mystery Cart, and a Mystery Book Investigation Kit Book. Also revealed at the fair were Halloween costumes by the manufacturer, Disguise.[7][8]

A set of books were released on July 22 and October 7, 2014. A Cinestory series was released over the course of several years till 2019 (the publishing firm behind it went bankrupt but the Latin American series continues). A real life adaption of Journal 3 was released on July 26, 2016 with a Special Edition in 2017. A Choose your own adventure book was released alongside it in 2016 and a graphic novel with new stories came out in 2018.

On June 10, 2014 at the E3 2014 press conference, it was confirmed that a Gravity Falls-themed power discs will launch with Disney Infinity 2.0 at launch.[9]

In 2014, Disney theme parks, select Disney stores, and the online Disney store began selling various Gravity Falls Vinylmation figurines. They are 1.5", 3", and 9" vinyl collectibles. The figures are all shaped with the body of Mickey Mouse, but have different themed markings, colors, and patterns.

On February 17, 2017 at Toy Fair in New York, a new line of Gravity Falls Funko Pops were announced.[10] A Waddles Funko Pop would eventually be released in 2019 as a Hot Topic Exclusive.

At the 2018 New York Toy Fair, a new line of Gravity Falls plushes were revealed. These included plushes of Dipper, Mabel, Stan, Ford, Soos, Wendy, Waddles, the barfing gnome, and Bill. [15] [16][17] A mini plush series was also planned.[18]These plushes were scrapped by the manufacturer before they were even released. [19]

Italian company Panini released a series of stickers for the Chilean, Italian, Portuguese and Brazilian markets. They are for sale in these countries and worldwide online. So far, no English releases are planned or released.

Russian toy manufacturer Prosto Toys announced a series of figurines in 2020, which were released in late November 2021.

Gravity Falls also had 3 DVD releases. One in 2013 with the first 6 episodes and another in 2014 with the next 8. A full box set including new content, commentaries and deleted scenes was released in 2018.

A Vinyl Soundtrack for the show is planned for May 2022.

References in other media

My Little Pony: Friendship is Magic. 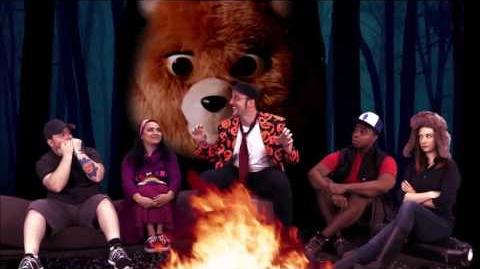 Where are Ü Now.

Star vs. the Forces of Evil. 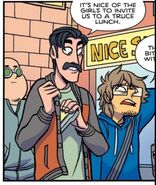 Adventure Time finale, "Come Along with Me".

Dipper's cameo in The Infographics Show.

Dipper and Gideon on the to-kill list of the Grim Reaper in 'Grave Mistake.'

The Mystery Ship in Wander Over Yonder. A pun on Scooby-Doo's Mystery Machine.

Dipper and Mabel as Jetson-like figures in Wander Over Yonder where they appear as the"Mystery Kids Mysteries," a space-alien version of Gravity Falls.

One of the Journal's in Amphibia.

Gnomes in the SVTFOE episode "Trial by Squir".

Dipper's hat in The Owl House. 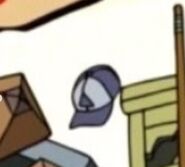 The Curator (Stan) and Frog Soos

The Curiosity Hut in Amphibia

The 'Fromes' (the gnomes) in Amphibia

Bill Cipher in The Simpsons

Bill Cipher in The Simpsons

Alex Hirsch and Rick and Morty co-creator Justin Roiland are not only friends, but have voiced characters on each other show's. They've also put in numerous easter eggs for fun in each of their works.

"Close Rick-counters of the Rick Kind" 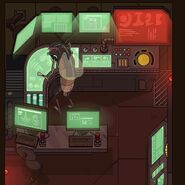 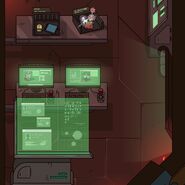 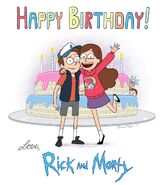 The series has received universal acclaim. It currently holds a 8.8 rating on TV.com,[28] and 8.9 rating from more than 7,774 users on IMDb.com.[29] From critics, the show has received generally positive reviews.[30] Brian Lowry of Variety stated, "The show has a breezy quality that should play to kids, and tickle some twinges of nostalgia among their parents."[31] While the Los Angeles Times Robert Lloyd referred to the program as "..gently twisted, with some Disneyfied action and heart-warming folded in".[32] In his review, David Hinckley of New York Daily News called Gravity Falls, "quirky and endearing", and offered praise for the character of Mabel Pines.[33] Matt Blum, writing for Wired, favorably compared the show to Cartoon Network's animated program Regular Show and Disney Channel's animated program Phineas and Ferb, hailing Gravity Falls as "clever, strange, and somewhat poignant".[34] The eleventh episode of season two, "Not What He Seems," was featured on A.V. Club's Best Television Episodes of 2015 so far along with episodes of Game of Thrones, Community and Adventure Time as well as others.