Gravity Falls Wiki
Register
Don't have an account?
Sign In
Advertisement
in: Merchandise, A to Z, DVD
English

If you meet forest gnomes disguised as zombies, dig up a mysterious old journal filled with secrets and ciphers, or encounter spooky hijinks at the local condemned convenience store, you've just crossed over into...GRAVITY FALLS, where there's always something peculiar going on! Join 12-year-old twins Dipper and Mabel Pines as they explore the oddest spot on the map.

Shipped off to spend the summer with their gruff Great-Uncle ("Grunkle") Stan - who runs the tacky tourist trap, "Mystery Shack" - the kids uncover mysterious surprises, unsurpassed silliness and supernatural shenanigans lurking around every corner of the deceptively sleepy little town. Packed with over two hours of hilarious adventures, irreverent humor and quirky, unforgettable characters, GRAVITY FALLS: SIX STRANGE TALES is a trippy trip into your family's fun zone!

The replica of journal #3 included in the DVD contains many pages taken from the journal in the show, including Floating Eyeballs, Gnomes, and The Undead. Each of these pages contains information about said creature or supernatural occurrence. It also contains a map of Gravity Falls, pictures of the Mystery Shack's interior, and postcards from Mabel and Dipper Pines.

Also, hidden within the book are transparent symbols which can only be seen when reflected by light. These are the same symbols found in a frame of the Gravity Falls Main Title Theme. Furthermore, the number 618 is hidden on several pages in the same manner. There is also a transparent cryptogram on the page that says "TRUST NO ONE!" that reads, "HYHU QRWLFHG VWDQV WDWWRR." Once decoded, it reads, "EVER NOTICED STANS TATTOO." This cryptogram is the same one as seen in the game Mystery Shack Mystery. The gnomes page is a replica of the page seen in episode 1, not the version edited by Dipper. 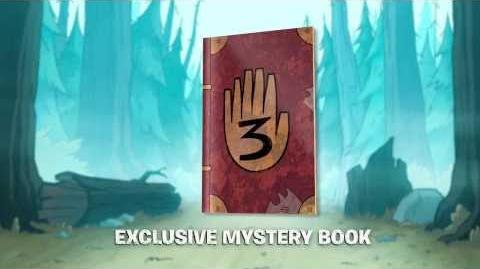