Gravity Falls Wiki
Register
Don't have an account?
Sign In
Advertisement
in: A to Z, Shorts, Commercials

Creature in the Closet

Creature in the Closet is the first Gravity Falls promotional short. It was aired several months before the series premiere, and can be seen on the Gravity Falls Official Website and Disney Channel's Official YouTube Channel.[1] It is a little over a minute long.

The clip begins with a time card that reads "HOUR 1." It shows Dipper's and Mabel's closet through a video camera. Mabel asks if the camera is rolling, and Dipper tells her it is. Dipper proceeds to describe what he witnessed, only to be interrupted by Mabel, who waves and says she also saw it. Dipper then says that he and his sister are trying to lure the creature that took a bite from his sock out of their closet. Mabel doubts that the creature is even in there, but it moves around in the closet, causing the floor to shake and the twins fall down.

The next time card, labeled "HOUR 2," is seen. Dipper states that the creature still has not left the closet, and Mabel attempts to make a scary sound effect. Dipper then tells Mabel that the monster could come out of the closet at any time, so they must be prepared. Mabel abruptly shouts, startling Dipper, but just states that Dipper's fly is down, much to his annoyance.

In the third hour, Dipper says the creature could be "the scientific discovery of the century," and Mabel thinks that it is probably just a possum. Dipper, extremely irritated, says that a possum could not stand on its hind legs, climb up a wall and leave a trail of purple slime. Mabel finds it adorable, much to Dipper's annoyance.

And then, in hour four, Dipper plans to lure the creature out with a bag of chips. He points the camera at the closet, then back at the floor when he realizes the chips are gone. It turns out it was just Mabel, who has already forgotten not to eat the chips.

In the fifth and final hour, Dipper worries that the camera will run out of charge before he and his sister can get it out. He tells Mabel they must hurry, and Mabel says he owes her five dollars if it turns out to be a possum. They open the door together, and are attacked by an orange creature. The screen goes fuzzy, and the camera falls on the floor, showing a sideways view of their bedroom floor, the main object now a penny. Mabel screams that the creature is "not a possum!" and the clip cuts to a card with the Disney Channel logo on it, and finally a "coming soon" card. 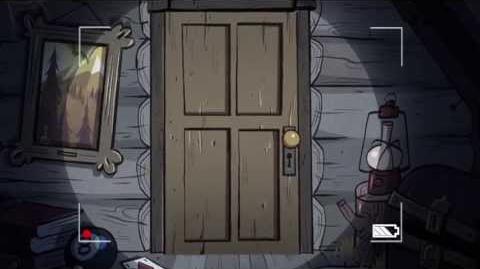