The unicorn in The Last Unicorn[1]

Lost a fight against Mabel and her friends

"I am Celestabellebethabelle, last of my kind."

Celestabellebethabelle (Celestabel-lebetha-belle) is a unicorn who lives in the Enchanted Forest. She made her first appearance in "The Last Mabelcorn."

In "The Last Mabelcorn," Mabel, Candy, Grenda, and Wendy travel to the Enchanted Forest to find unicorn hair to help Ford. After Grenda summons the doors to the home of the unicorns by chanting a chant in the deepest voice, Celestabellebethabelle appears, claiming to be the last of her kind. After telling them to take off their shoes, she tells the girls that she will offer a lock of her hair to only the purest of hearts, seemingly using her horn to 'see' into Mabel's heart. She pronounces Mabel not pure, and urges the girls to leave, insisting they take their shoes with them.

Celestabelle maintains Mabel is still not pure of heart despite her good deeds, sending them away while she does her "three o' clock posing in front of a rainbow". When Candy, Grenda and Wendy secretly return with fairy dust to knock her out, Celestabelle is reading "Whinny, Pray, Trot" and commenting on how traveling isn't feasible with the current economy, while a faun serenades her with a pan flute. When Celestabelle wakes from the effects of the fairy dust, she mistakes Mabel for the one attempting to cut her hair. She starts on an angry tirade about how Mabel will never be pure of heart when two other unicorns appear. While they tell the girls that the pure of heart story is a scam to get humans "off [their] backs" and that their horns aren't magical, Celestabelle repeatedly attempts to shush them.

Once the truth is out, Celestabelle drops her act and openly taunts the girls about having more hair than she knows what to do with and not sharing it - only to be met by a punch to the face from Mabel. This causes a fight to break out between the girls and unicorns. After being beaten by the girls, the unicorns give them a lock of Celestabellebethabelle's hair and a chest full of treasure just to get rid of them. 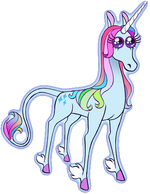 Celestabellebethabelle is a blue-tinted unicorn, whose horn glows pink and red. Her mane is multicolored, with purple, blue, pink, yellow, and green locks. Her eyes are overly large and purple (with only one visible when she is shown in profile), and have long eyelashes. Her hooves are pink and have white tufts of hair coming from right above the hoof, and she has three blue sparkles on her rear. Her tail has hair only at the tip, and it is the same style and color as her mane. In "Weirdmageddon 2: Escape From Reality," when it was revealed that she had taken shelter in the Mystery Shack with the other Survivors, she had a bruise on the side of her head. She seems to be based on Princess Celestia from the My Little Pony: Friendship Is Magic series.

Start a Discussion Discussions about Celestabellebethabelle