Gravity Falls Wiki
Register
Don't have an account?
Sign In
Advertisement
in: A to Z, Places, Season 1 places,
and 3 more
English

Not What He Seems (mentioned)

4
The bunker is an underground hideout constructed by Ford Pines and Fiddleford McGucket, used as a base of operations for their experiments, and a shelter in the event of disaster.

Over thirty years ago, Fiddleford brought up the topic of a more secure laboratory he and Ford could use to study dangerous creatures they might find when their portal to the weirdness dimension was activated. Ford, despite being reluctant to postpone their work on the portal, agreed that a new lab space was necessary and allowed Fiddleford to begin planning its layout—however, unbeknownst to him, Fiddleford was also increasingly fearful of Gravity Falls’ oddities and the prospect of encountering more, and he designed the lab to function as a bunker complete with fallout shelter and lethal security system.

Both Ford and Fiddleford participated in the building of the bunker, excavating the area and hiding their lab beneath an artificial tree within the Gravity Falls Forest.

Ford was by this point extremely paranoid about the idea of someone with nefarious intentions discovering and stealing his research, and demanded that he and his assistant be the only two people to know about the bunker. Meanwhile, Fiddleford was hugely anxious to gain a sanctuary from the weirdness of Gravity Falls, and so went behind Ford’s back to secretly hire lumberjacks to hasten the construction speed, using the Memory Gun on both them and his boss to clear his tracks.

While excavating the land for the bunker, Ford discovered an egg containing the Shape Shifter, who would become one of the bunker’s experimental specimens due to his DNA possessing the unique power to constantly metamorphose.

Ford was fascinated by him, keeping him in a cage and tracking his progress despite Fiddleford’s uneasy reminders that they were only keeping him around to test their cryogenic freezing chambers.

The two men lured him into a cryogenic chamber with a decoy journal and froze him there. After this incident, both agreed to seal the bunker off for piece of mind, an action which unwittingly prevented the Shape Shifter from reaching the outside world after his escape from cryogenic stasis an unknown length of time after being trapped.

Ford returned to the bunker after his betrayal by Bill Cipher to hide his third journal in a nearby compartment controlled by the same artificial tree. From then on the area would lie dormant for decades as its creators either disappeared or lost their memories of the place.

Dipper first finds the bunker's exterior after coming across its artificial tree in "Tourist Trapped," eventually locating the security mechanism used in hiding Journal 3. Intrigued by its content, Dipper retreats to the Mystery Shack to reveal his findings to Mabel.

The bunker's interior is unveiled in "Into the Bunker," when Dipper, Mabel, Soos and Wendy explore the location after learning of it in Journal 3. Their investigation is cut short, however, when the Shape Shifter attempts to destroy them, leading them into a destructive skirmish that ultimately lands him in the fate Ford originally intended; frozen in cryogenic stasis. Despite their failure to learn Ford's true identity, Soos inadvertently brings Fiddleford's laptop out of the bunker alongside them, allowing their quest to continue on.

The Bunker is mentioned again in the Gravity Falls: Lost Legends story "Face It", with Ford intending to lock the frozen Mr. What's-His-Face inside it. 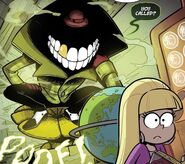 The bunker is a subterranean complex built beneath the Gravity Falls forest, only accessible through a mechanical, technological automaton in the guise of a tree. A small chamber is used to house a device serving as both a surveillance system and operator to conceal Journal 3 in an underground crevice. A lever on the topmost section of the tree (disguised as a branch) activates the lowering of a spiral staircase, as well as the opening of a large door into the bunker.

The stairs lead to a small room with weapons, food stock, and Smez. A poster conceals a small hallway leading to another small room.

A chamber composed of tiles on the walls, floor and ceiling. Stepping on a specially marked tile in the middle triggers a booby trap in which the tiles individually expand forward to crush whoever is inside. The only way to prevent this is to press four specially marked tiles to open a door to safety.

A room linked to a number of security cameras in the lab, most likely meant to serve as a way to safely observe and experiment on the test subjects.

A laboratory where all the experimental subjects are kept under lock and key, preferably in cryogenic stasis.

A section of tunnels dug out by the Shape Shifter to live in, a swath of cloth over the entrance serves as a doorway.