Gravity Falls Wiki
Register
Don't have an account?
Sign In
Advertisement
in: Characters, A to Z, Females,
and 3 more
English

To take over Mabel's dimension (failed)

Unknown, either dead or revenge-plotting her way through the multiverse.

“The exact kind of Mabel you aren’t. And considering how easy it was for me to guess this, you’ll probably never figure it out.”

Mabel "Anti-Mabel" Pines is one of the alternate universe versions of Mabel Pines trapped in MAB-3L. She pretends to be an ally of the main Mabel, before betraying her and revealing herself as the Anti-Mabel, the most evil Mabel in the multiverse. She then went on to pretend to be the Main Mabel in hopes of taking over the main dimension. Luckily, Main Mabel and the Mabel Army, alongside Stanley and Stanford, defeated her and trapped her in the vacuum of the Multiverse.

At some point before the Main Mabel ended up in MAB-3L, Anti-Mabel was trapped there as well. Little else is known about this.

She was kicked out of her own dimension for being so evil.

Anti-Mabel pretended to be waiting for the Stans as well, to trick Main Mabel into becoming friends with her. The two of them stole a flare from Military Expert Mabel, and set it off to get the attention of the Stans. Once the Stans landed, Anti-Mabel locked Main Mabel in the outhouse, and then revealed her true nature to her counterpart. Then, she impersonated Main Mabel and went onto the space ship with the Stans.

Fighting the Other Mabels

The other Mabels would later use grappling hooks to catch up with the Stans. Anti-Mabel trapped all the other Mabels however. The only one she didn’t trap, Main Mabel, would get into a one on one fight with Anti-Mabel. The Stans, confused on who was who, remained neutral, until Main Mabel removed Anti-Mabel’s sweater, revealing that Anti-Mabel was wearing a shirt that said “I Hate Cats.” The Stans immediately knew which one was which after that, and they shot Anti-Mabel into the vacuum of inter-dimensional space. It is unclear if she survived this, but signs point to yes.

Anti-Mabel is initially depicted as almost identical to Mabel in terms of personality, though this is quickly revealed to be a ploy, and she is instead shown to be the exact opposite. She is noted to be cruel, manipulative and largely heartless, doing whatever it takes to achieve her goals, including throwing others under the bus, up to and including alternative versions of herself.[1]

In Lost Legends' Shmeb-You-Unlocked secret pages, she is described as being "Anti-Lovable."[2]

Anti-Mabel seems practically the same in appearance as Mabel Pines, excepting for her slightly spikier hair and that she wears a shirt that says "I Hate Cats" under her sweater.

According to the Lost Legends' Shmeb-You-Unlocked , she is acquainted with Anti-Dipper (an incorrigible flirt), Anti-Stan (a charity-obsessed hippie), Anti-Ford (wannabe Youtube star/part-time DJ), Anti-Soos (Forbes Billionaire) and Anti-Waddles (the first pig to ever go to prison for armed robbery). She has attempted to take over her home dimension and subjugate its other residents, and is enemies with the authorities there after they exiled her over this.

She is also enemies with Mabel Pines, Stan Pines, Ford Pines and all the Mabels from MAB-3L after nearly accomplishing her plan of impersonating Mabel in order to gain access to a new dimension to conquer, and attempting to kill all of the other characters when this plan failed.

While she is the exact opposite of Mabel in many ways, both share an ability to think creatively and solve problems quickly, as seen when she immediately comes up with a plan to trick and replace this new Mabel she meets when she realizes she has people looking for her.

She has an affinity for weapons, asking Ford if he has any she can borrow and claiming that "this Shooting Star shoots back!" She is also quick on the draw, managing to shoot Ford before he can do the same to her. When attacked by an army of Mabels she is able to efficiently disable them using Ford’s alien adhesive gun to stick them to the walls. 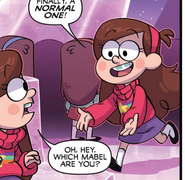 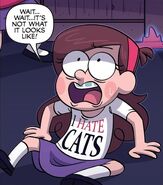