The hillbilly is a resident of Gravity Falls, Oregon.

The hillbilly first appears in "Tourist Trapped" among a group of tourists at the Mystery Shack, asking if the Rock That Looks Like a Face Rock also looked like a rock.

In "Irrational Treasure," he celebrates Pioneer Day with most of the town, initially riding a wagon with Shmipper and Smabble and helping surround Grunkle Stan's car. Later, he attends the wedding of the Woodpecker guy and a woodpecker.

He attends the Mystery Fair in "The Time Traveler's Pig." Like many other patrons, he is angered by Stan mocking them about not being able to dunk him, and is disappointed when the ball thrown by Dipper does not dunk Stan, and cheers when Lolph manages to finally put him in the water with his laser.

In "Fight Fighters," the hillbilly plays a video game featuring the recurring pyramid figure at the arcade.

In "Boss Mabel," he is seen with other townsfolk at the Mystery Shack being greeted by Mabel, who was the temporary boss. Afterwards, he leaves satisfied.

He appears in Dipper's story in "Bottomless Pit!."

In "The Deep End," Mabel jumps over him in an attempt to get to Mermando.

In "Gideon Rises," he is seen amongst the crowd as Gideon Gleeful announced his plans for the former Mystery Shack. Later, he is seen disappointed along with other townsfolk after it was revealed Gideon is a fraud.

In "Mabel's Scrapbook: Heist Movie," he was in the audience for "Pony Heist."

In "The Golf War", he is seen at Putt Hutt watching Mabel play mini-golf, as well as clapping for Pacifica when she showed her superior skills at the game.

In "Soos and the Real Girl," he is a patron at Hoo-Ha Owl's Pizzamatronic Jamboree.

In "Northwest Mansion Mystery", he's among the town's people trying to catch a glance of the party inside the Northwest Manor. He also managed to get inside the party after Pacifica opened the main gate.

In "The Stanchurian Candidate" he is seen among in the crowd listening to Stan's speech.

In "Weirdmageddon 2: Escape From Reality," he is one of the people in Bill's throne.

In "Weirdmageddon 3: Take Back The Falls," he was seen again in the throne.

The hillbilly is rather unintelligent, as shown by his question about Rock That Looks Like a Face Rock looking like a rock. He seems to be quite friendly, as shown by his wave to the Pines in "Irrational Treasure," though he can be angered when people mock him.[2] He enjoys playing video games.[3] A woman with round glasses sat next to him at the theater and appeared to be attending the play as his date. [4]

The man looks like a stereotypical hillbilly. He has brown hair worn in a mullet, a rather tall head, crossed eyes with bags under them, a large nose, missing teeth, and sparse facial hair. He is thin and has a light skin tone. He usually wears tattered, blue overalls, and long white socks with brown sandals. For unknown reasons, he is missing most of his right pinky finger. 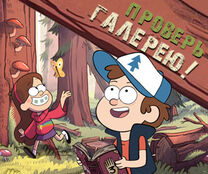